Why is my gas mileage worse in the winter? 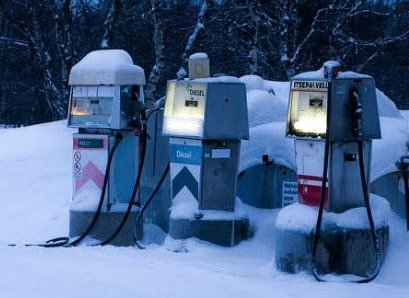 With fluctuating fuel costs we are all effected when it comes to fuel mileage. As we move into the colder winter months it can be anticipated that our fuel mileage will be worse. There are several reasons your fuel mileage is worse in the winter beyond obvious reasons such as letting the car warm up at idle for longer periods in the morning. Some would argue the tire pressure, but with tire pressure monitors on just about every car since 2005 we all stay on top of that for the most part. Some would argue the road conditions, but they get cleared pretty fast on the highways these days. So what other reasons?
The basic mechanics of how the engine operates is the largest factor. Engines today use electronic sensors to run the engine. It relies on these sensors to tell the engines computer how much fuel to inject into it and at what temperature. It also uses sensors to tell it how good a job its doing so it can make changes for you at different temperatures. So the Engines computer is set with a base parameter when it comes to the Air/Fuel ratio it needs to maintain the best possible fuel mileage it can deliver. When the Air temperature is colder you can fit more air into the same space and in order to keep the same air/fuel ratio the engine must have more fuel added. Once the engine warms up the outside temperature doesn’t change much even when it gets closer to the engine so you will continue to keep getting worse fuel mileage.
You can expect that once the outside temperature returns to warmer summer days that your fuel mileage will return.

Here is a great example:

Have a gander at these calculations for a Honda Civic hybrid at 60 MPH in varying ambient temperatures:

Look at the extremes: the coldest MPG is 28% lower than the warmest. (Source: hybridcars.com.)