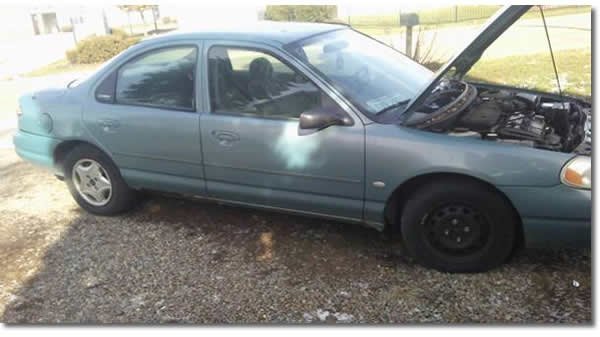 My Sisters car is a  1997 Ford Contour 2.0L. It stopped blowing hot air and then a couple days later her temp gauge is not going up, the car overheats then shuts off. I changed the thermostat and coolant temperature sensor and it is doing the same thing. Now I find out there is a temperature SENDING unit. If this is bad I understand this could cause the gauge not to work but can it cause the car to overheat?

The most common cause for your situation would be a leak in the cooling system. The coolant level drops and causes the car temperature gauge to read hot. And when this occurs there is no longer enough coolant to produce heat therefore no more blowing hot air. Until the leak is repaired the cooling system will not work properly as it needs to be able to build pressure.

Some engines have a temperature sending unit that is used just for the gauge on the dash. The engine will have a separate sensor for the engines computer. They are both referred to as an ECT – Engine Coolant Temperature sensor. On your engine there appears to be two ECT Sensors according to the wiring diagrams. The one with WHT/GRN and Brn/GRN wires is used for the engine controls. The other with WHT/RED and BLK/BLU wires is for the gauge on the dash.

Looking at the repair manual information it is sort of vague. There is an ECT sensor shown in the Thermostat housing and stated there may be another mounted in the engine block or engine head assembly.

I have found that sometimes it is beneficial to use a hand held infra-red temperature gauge to assist in these situations. This is better than relying on a gauge that may not be reading correctly.