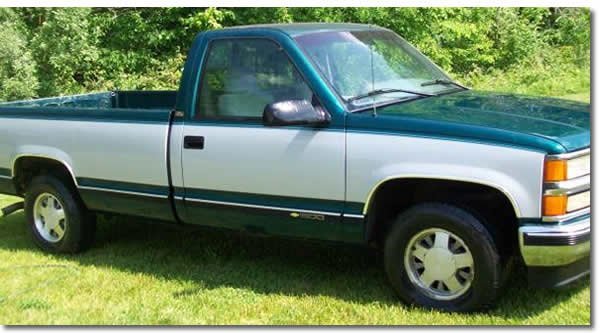 Where is the cam sensor located I really would love to see a picture?

It is located inside the distributor assembly.

The enhanced ignition system used on all OBD II engines somewhat resembles the current distributor ignition (DI) system described in the ignition systems. However, the system has been greatly enhanced in order to make it compatible with the new OBD II regulations. The enhanced ignition system provides a spark at precisely the correct time in order to ignite the air and fuel mixture for optimum performance and fuel economy. The system consists of the following components:
•Vehicle control module (VCM)
•Distributor
•Ignition coil driver module
•Ignition coil
•Crankshaft position (CKP) sensor

This system does not use the ignition module used on the DI systems in the past. The VCM controller now controls the ignition control (IC) and bypass functions.

The VCM then utilizes this 3x (V6) or 4x (V8) signal in order to provide the correct spark to the engine by way of the single coil driver module. The single coil driver module is basically an electronic switch that when commanded by the VCM, causes the primary coil voltage to breakdown, energizing the secondary coil and providing a spark via the coil wire to the distributor cap. The distributor consists of the following components:
•Cap and rotor
•Camshaft position (CMP) sensor
•Gear drive and shaft

The camshaft drives the distributor shaft which rotates providing a spark to the correct cylinder by way of the cap and rotor. The camshaft position sensor functions much like the crankshaft sensor previously described but provides only a 1x signal to the VCM. That is, for every 2 rotations of the crankshaft, there is 1 rotation of the camshaft. Note that the CMP sensor will not affect driveability. The sole purpose of the CMP sensor is to provide the VCM with the necessary information for the misfire DTCs.