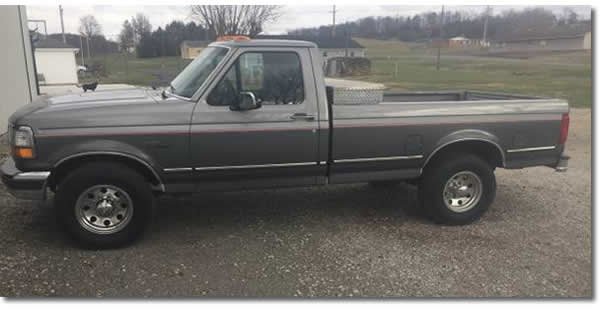 I have a 1991 Ford F250, 5.8L that is 2WD and has 126,000 miles on it. Purchased this truck about 3 years ago (really good price). I did not have the time or need to get it repaired and did not want to deal with ridiculous CA SMOG regulations. When I purchased it the check engine light was on. I did some troubleshooting and replaced the fuel filter, idle air control valve and throttle position sensor. This took care of the CEL. I then tried to have it SMOG’d and it failed because it was smoking (valve cover leaks). In July I purchased valve cover gaskets, plugs, wires, cap and rotor to clean things up and make it run better. It passed SMOG test in September and my son started driving it.

It ran well for about two months. One day my son was driving to work and the truck stalled (in neighborhood) and would not restart. I pushed it out of the road and went back to get it home a couple of days later. It started immediately, I drove it home (1\2 mile) and switched the fuel tanks a couple of times without issue.

I hooked it up to my tester and it produced a code 67 for a neutral position switch problem. We replaced that and it started and drove great for a couple of days. Then it happened again. Driving around the neighborhood it stalled and would not start again. It took a few days to get back to it and again once it was started it drove home fine (again, only about 1\8 mile). We again hooked up the tester to the truck and it returned a Code 11 (All Clear).

I am thinking it is a fuel issue of some kind. The truck sat for a while (three years) so I am wondering if there might some junk in the fuel tank(s) that could be clogging things up. I don’t think there is a pump problem because it does run after it sits for a couple of days. Appreciate any help you can give.

I am guessing electrical issue because it is pretty common for what you are describing. It starts and runs fine when cold but once it warms, the engine dies. Leave it set long enough to cool down and the engine starts back up and runs. This is exactly what happens when the Ignition Control Module starts to fail. The part is fairly inexpensive and easy enough to change out yourself. The replacement instructions taken from the manual (see below) indicate you need to remove the distributor, but in most cases this does not need to be done.

I have look up the Ignition Control Module for you and double checked to make sure it will fit your application. Just follow the image to purchase the part for $32.15 from Amazon.