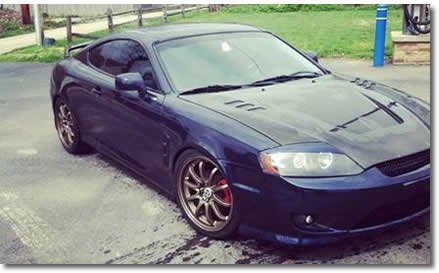 Hi, I need some help. Just over a week ago I bought a used 2006 Tiburon A/T with 116,000km on it. It looks great and drove fine until yesterday, when suddenly it refused to shift into second gear after stopping at a traffic light. I was on a busy road and couldn’t really push the transmission to see if it would eventually shift, but the rpm definitely went to about 4,000 without shifting. It happened after shifting from N into D, and I think I took my foot off the brake a little to early – I felt the car jolting a bit forward when I shifted into D. After parking and restarting the car, it worked fine. Has anyone had a similar problem? Does this mean the transmission is toast, or is it a sensor issue, or any other ideas what it could be? The transmission fluid seems fine and I can see no leaks under the car.

You stated “After parking and restarting the car, it worked fine.” With that said, It may have just been a glitch.

As for taking your foot off the brake too early shifting from neutral to drive… This is commonly referred to as a “Neutral Drop”. This is considered Hot Rodding and is performed to try and get the tires to spin. It will cause internal damage to the transmission if repeated. Sometimes it only takes one time to cause damage.

If the transmission shifts OK now, try to refrain from placing the transmission in neutral. It may tempt you to do it again. Once the car is placed in drive there really isn’t a reason to touch the shifter until you need to place it in Park.

If the transmission no longer shifts correctly, you have damaged it internally.