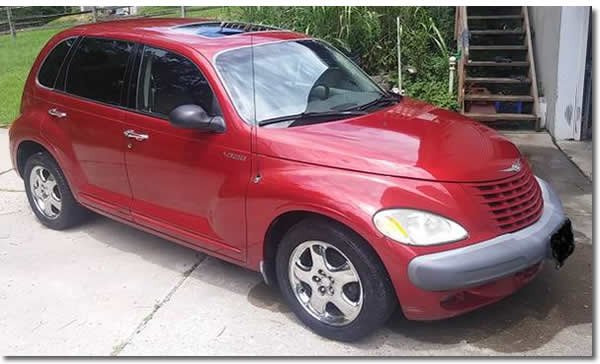 2002 PT Cruiser radiator problems. Overheating after just a few miles, never have seen a leak but have added a lot of antifreeze (like 2-3 gal). This is what I’ve done so far. Antifreeze , thermostat, cap -cuz seal was broken. Heat works sometimes, but it does overheat at about 3-4 miles. I’ve heard some scary sounds, but its rare. I’m a girl but do know cars…brakes, distributor caps, alternators, etc. But on cars newer then 1980’s fuel injection, don’t know to much.
Could it be water pump? Just not sure what to do. Also, front windows don’t work anymore, rear windows are fine and all the fuses are fine.
Thank you so much, any guidance would be great!

Since you are loosing anti-freeze that would be the first thing to figure out. You will need to pressure test the cooling system to determine if and where the leak is coming from. It can leak externally or internally. And also determine if the radiator cooling fan is coming on as it should.

That being said, it is important that the antifreeze that you added was 50/50 mix. If you add straight water or straight antifreeze it can and will overheat quickly. Therefore antifreeze and water mixed together offer a higher boiling point.

Top off cooling system. Acquire a cooling system pressure tester and connect it to the radiator in place of the cap. Pump up the pressure to around 15 psi and allow it to hold for 15 minutes. Look underneath and around the engine bay for signs of leaking coolant/antifreeze. If the pressure drops rapidly then you know there is a large leak and should be fairly easy to locate.  In addition, a slow drop may be more difficult to locate the leak. Placing a clean piece of cardboard under the car may assist in locating the leak.

If you see the pressure drop quickly on the pressure tester without any signs of external leaking you are left with and internal leak. Internal leaks generally cause a noticeable performance issue such as an engine misfire. Finally you may also see the check engine light come on.

Air can only be removed from the system by gathering under the radiator cap. On the next engine heat up cycle, the air is pushed past the radiator cap into the coolant recovery bottle by thermal expansion of the coolant. The air then escapes to the atmosphere in the coolant recovery bottle and is replaced with coolant on cool down. To effectively deaerate the system, multiple thermal cycles of the system may be required. Deaeration does not occur at engine idle. Higher than engine idle speeds are required. Normal driving will deaerate the cooling system.

The required ethylene-glycol (antifreeze) and water mixture depends upon the climate and vehicle operating conditions. The recommended mixture of 50/50 ethylene-glycol and water will provide protection against freezing to -37 deg. C (-35 deg. F). The antifreeze concentration must alwaysbe a minimum of 44 percent, year-round in all climates. If percentage is lower than 44 percent, engine parts may be eroded by cavitation, and cooling system components may be severely damaged by corrosion.Maximum protection against freezing is provided with a 68 percent antifreeze concentration, which prevents freezing down to -67.7 deg. C (-90 deg. F). A higher percentage will freeze at a warmer temperature. Also, a higher percentage of antifreeze can cause the engine to overheat because the specific heat of antifreeze is lower than that of water.

100 Percent Ethylene-Glycol—Should Not Be Used in Chrysler Vehicles