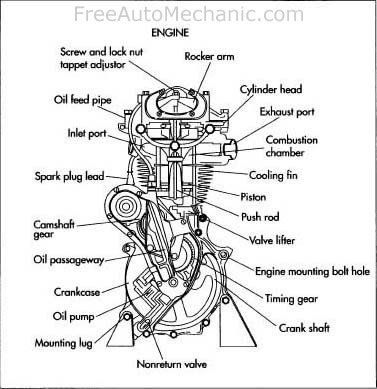 You can have the hottest cam, perfect ignition timing, clean carburetor, and fresh gas, but without good compression... that engine is not going to run. The first thing to do, when a non running bike comes in, is to run a compression test. If the engine does not have at least 100 PSI (Pounds per Square Inch) in each cylinder, then don't work on it, except to rebuild it. It would be a waste of the customers money if you "Tried" to make it run.

The drill is simple. Remove all the spark plugs, ground all the spark plug wires or turn off the ignition, if possible. Screw or push the end of the gauge into the spark plug hole, open the throttle wide, and kick away. I like to kick (or turn the engine over with the electric starter) about four to five times and then check the gauge. Remember the reading, release the pressure on the gauge, by pushing the little releases, and do it again. If the reading changes, do it till you get several readings that are all the same. That would be the correct pressure.

Technically, You should do this when the engine is hot. A hot engine would probably read a few pounds more, but a cold reading will tell you what you need to know. Run the test on each cylinder. All the cylinders on an engine should be within ten pounds of each other. In other words, a four cylinder engine reading 145 PSI, 150 PSI, 147 PSI, and 155 PSI would be considered good. If it had 135 PSI, 150 PSI, 150 PSI and 155 PSI, it would not be considered good. Something is starting to go wrong with that first cylinder. OK, you have a cylinder that reads low. Is it valves or rings, leaking that compression ? A quick, down and dirty test is this. Squirt some oil, maybe a teaspoon's worth, into the cylinder through the spark plug hole. Now run the test again. The oil will hold compression for several turns of the engine. If your retest with oil gives higher compression, you will know the rings are worn. If there is no change in compression, it's the valves that are leaking. If you think it's the valves, it's always a good idea to check the valve tappet clearance. If the valves are tight, they could be leaking compression. If the valves are tight, reset them to the proper clearance and test again. if your compression comes back don't thank your luck, thank Jesus ! He just saved you an engine rebuild.

If you have an engine with Constant Velocity carbs the test is still done the same, with the throttles wide open. You might think they would read different, but they don't seem to.

Sometimes the spark plug holes are kind of weird in the size department and you will have to use an adapter on the end of the compression tester gauge. You can get a lot of different types of adapters, but sometimes you may need a special adapter that no one sells. You can try to use the push type of tester. It has a rubber tip that fits into the spark plug hole and is held there by hand pressure. Sometimes, due to the position of the spark plug, that will not work. If you can't buy the right adapter you can make one out of an old spark plug.

To make one, simply take a spark plug that fits the engine you want to test and remove the part of the metal base that is crimped over the ceramic portion of the spark plug. You can do this with a hack saw, and the crimped part will come loose like a ring. Now you can knock the ceramic part of the plug out with a drift from the nose end of the plug. This leaves you with just the metal portion of the plug. Now you can cut threads inside the end with a tap, like the one above, or weld it up with metal and redrill it to the right hole size if the plug is too big to tap as is.

If you don't have a compression gauge handy, all is not lost. A down and dirty way to do it is to simply press your thumb over the spark plug hole and hold it there tight. Now have someone kick the engine over. No matter how hard you push your thumb, the compression pressure should blow it off the hole smartly. If it won't, you don't have enough compression to start the engine.

Big-inch, high-compression motorcycle engines can be a bear to start. They fire off when they spin, but getting them to turn over can be taxing on motorcycle parts like starters and electrics. There are a few things you can do to make life easier on your starting system, some mechanical, some electrical. First you need to determine if the slow cranking is mechanical or electrical in nature. We like to do a cranking compression check with the throttle open. High performance motorcycle engines will read about 180psi, more than that suggests too mild a cam for the compression ratio. Installing a cam with more overlap will help this. Altering the degree on your cam can also help, this requires special timing tools and is usually a motorcycle parts shop job.

If your cranking compression is within reason, other mechanical causes for slow cranking could be a worn or binding starter or drive, melted stator dragging on the rotor, hydraulic lifter bleed down, seized piston, or oil/gas sumped motor. In addition, high viscosity oils run at lower temperatures will cause sluggish cranking. We run 50 or 60w oils in the heat of summer, but when morning temps dip into the 50's we switch back to 20/50w and it makes a world of difference in the way the motorcycle engines start and warm up.

Electrical causes are common too, so an amp draw check on the starter is in order. A weak battery, corroded or undersize battery cables, poor wiring connections, or inadequate ignition timing will cause problems. Some very large motorcycle engines require a special advance curve with more ignition retard at the beginning to keep them from kicking back and spewing the starter gears.

On race bikes you can also re-wire the handlebar kill switch so that the engine will crank with the ignition off, then flick the switch on once the engine is spinning. This is also helpful in service applications. I like to put my hand on battery cables after cranking the motorcycle engine for a few seconds and check for heat. If the wires get very warm, they may have internal resistance or be too small for the amount of current in them. A second ground cable from the battery directly to the starter can help many times, but heavy duty cables like the Fisher setups are the best. On large motors, S&S recommends leaving the throttle closed until the engine fires, it makes most enrichener systems function better and because it admits less air, it reduces cranking compression.

For extra-stubborn cases, you can install compression releases. On motorcycle engines with dual plug machining like Rev-Tech or the new S&S TC88 heads it's easy, but on earlier or stock engines it requires dis-assembly and machining an extra plug hole in the heads.

What Every Lubricant Must Do

Though the ability to minimize friction is the number one function of a lubricant , there are other major functions that must be considered. Here are some of the basics without getting to technical. A lubricant is likely to be also required to: