Any automotive air conditioning system employs four basic parts-a mechanical compressor, driven by the vehicle's engine; an expansion valve, which is a restriction the compressor pumps against; and two heat exchangers, the evaporator and the condenser. In addition, there is the refrigerant that flows through this system.

The belt-driven compressor uses engine power to compress and circulate the refrigerant gas throughout the system. The refrigerant passes through the condenser on its way from the compressor outlet to the expansion valve. The condenser is located outside the passenger compartment, usually in front of the vehicle's radiator. The refrigerant passes from the expansion valve to the evaporator, and after passing through the evaporator tubing, it is returned to the compressor through its inlet. The evaporator is located inside the vehicle's passenger compartment.

The pressure in the evaporator is low enough for the boiling point of the refrigerant to be well below the temperature of the vehicle's interior. Therefore, the liquid will boil, remove heat from the interior, and pass from the evaporator as a gas. The heating effect produced as the refrigerant passes through the compressor keeps the gas from liquefying and causes it to be discharged from the compressor at very high temperatures. This hot gas passes into the condenser. The pressure on this side of the system is high enough so that the boiling point of the refrigerant is well beyond the outside temperature. The gas will cool until it reaches its boiling point, and then condense to a liquid as heat is absorbed by the outside air. The liquid refrigerant is then forced back through the expansion valve by the condenser pressure.

Fig. 1: The same substances can exist in three states, depending on the temperature 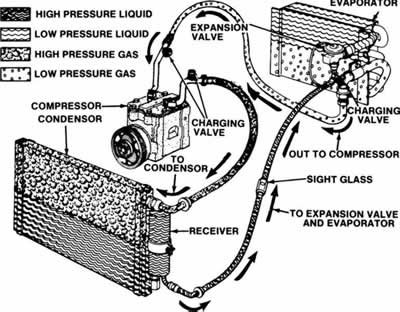 A liquid with a low boiling point must be used to make practical use of the heat transfer that occurs when a liquid boils. Refrigerant-12 (R-12) is the refrigerant that was universally used in automotive air conditioning systems. At normal temperatures, it is a colorless, odorless gas that is slightly heavier than air. Its boiling point at atmospheric pressure is -21.7°F (minus 6°C). If liquid R-12 is spilled into the open air, it would be seen for a brief period as a rapidly boiling, clear liquid.

R-12 was nearly an ideal refrigerant. It operated at low pressure and condenses easily at the temperature ranges found in automotive air conditioning systems. It is also non-corrosive, non-toxic (except when exposed to an open flame), and nonflammable. However, due to its low boiling point and the fact that it is stored under pressure, certain safety measures must be observed when working around the air conditioning system. Unfortunately it was discovered the carbo-floro-carbons (CFC's) which were chemicals in the same group as dichlorodifluoromenthane, which you know as R-12 or Freon were depleting the ozone layer of the atmosphere.

On December 31, 1995, CFC-12 production essentially ended in the U.S. However to avoid release into the atmosphere it is still legal to use the existing stockpiles of CFC-12.

The replacement for CFC-12 has been a non-CFC refrigerant R-134a. This has been used since the 1994 model year. Some of the older R-12 systems are being changed over to R-134a but this can be a costly and complicated process on some vehicles.

There is a third category for refrigerants that substitute CFC-12, these also contain ozone depleting HCFC's such as R-22, R142b, and R-124.

There are strict governmental regulations enforced by the clean air act of 1990 section 609. These include specific regulations for the use and handling of each of the three types of refrigerants.