Hybrid-electric vehicles (HEVs) combine the benefits of gasoline engines and electric motors and can be configured to obtain different objectives, such as improved fuel economy, increased power, or additional auxiliary power for electronic devices and power tools. Compare Hybrids Side by Side 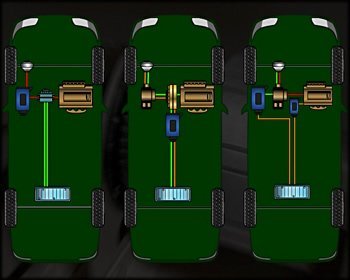 There are three hybrid systems,

In series hybrid an internal combustion engine drives an alternator. The current produced by the alternator is used to power an electric motor that drives the wheels. It is called a series hybrid system because the power flows from the engine to the motor, before flowing to the wheels. In principle, a small-output engine drives a generator and supplies electricity to drive the electric motor and charge the battery.

A parallel hybrid system uses an efficient internal combustion engine to drive a transmission conventionally, but it also drives a flywheel mounted motor/generator, which charges a storage battery when the engine is turning. It is called a parallel hybrid system because the power flows to the wheels in “parallel”. This means that energy from the battery can be released, when needed, and delivered to the motor/generator to assist the engine in driving the transmission. Although it has a simple structure, the parallel hybrid arrangement cannot drive the wheels from the electric motor while simultaneously charging the battery due to the fact that the system only has one motor.