An ignition system is for igniting a fuel-air mixture. It is best known in the field of internal combustion engines

Most four-stroke engines between 1996 and 2005 are equipped with DIS or Distributorless Ignition System. These systems have done away with the distributor and use sensors instead. The advantage is the ability to electronically control ignition timing without the need of adjustment. 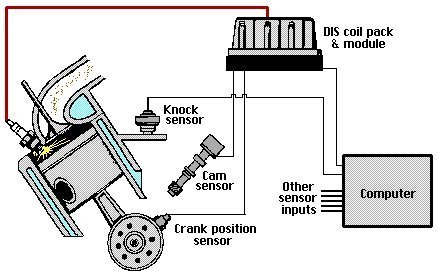 A car engines Ignition System with DIS type ignition systems can seem complex, but once simplified can be diagnosed with ease. Using the Diagram provided above you can see there are several different components. An electrical signal is generated by the ECM which calculates spark timing by using the crank position sensor and cam position sensor. The Knock Sensor keeps the ignition timing from being advanced to far and will back off the timing should the engine begin to "ping". In most DIS ignition systems the ignition module and coil are separate, but some are combined. The most common failure component is the ignition module outside of normal maintenance.