Troubleshooting and Testing Electrical Systems with a Multi meter

When diagnosing a specific problem, organized troubleshooting is a must. The complexity of a modern automotive vehicle demands that you approach any problem in a logical, organized manner. There are certain troubleshooting techniques, however, which are standard:

Experience has shown that most problems tend to be the result of a fairly simple and obvious cause, such as loose or corroded connectors, bad grounds or damaged wire insulation which causes a short. This makes careful visual inspection of components during testing essential to quick and accurate troubleshooting.

Fig. 1: The infinite reading on this multi meter indicates that the circuit is open 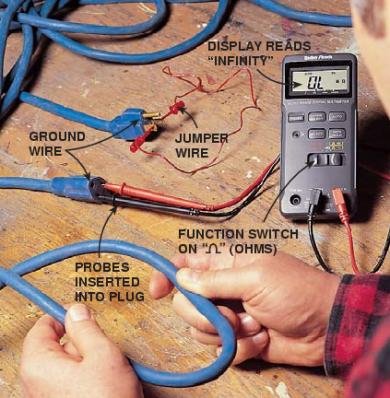 This test already assumes the existence of an open in the circuit and it is used to help locate the open portion.

NOTE: Never use a self-powered test light to perform checks for opens or shorts when power is applied to the circuit under test. The test light can be damaged by outside power.

This test determines voltage available from the battery and should be the first step in any electrical troubleshooting procedure after visual inspection. Many electrical problems, especially on computer controlled systems, can be caused by a low state of charge in the battery. Excessive corrosion at the battery cable terminals can cause poor contact that will prevent proper charging and full battery current flow.

When current flows through a load, the voltage beyond the load drops. This voltage drop is due to the resistance created by the load and also by small resistance's created by corrosion at the connectors and damaged insulation on the wires. The maximum allowable voltage drop under load is critical, especially if there is more than one load in the circuit, since all voltage drops are cumulative.

Testing if a diode is OK

A diode is like a one-way valve. It should allow the current to only flow in one direction and prevent the current from flowing in the other direction. A good diode should show continuity in one direction and no continuity (or over range) in the other.
Do not test the diode whilst there is an external voltage (eg solar panel) connected as this will effect the outcome and possibly damage the meter.
Connect the probes to the device you want to check and
note the meter reading. Reverse the probes and note the second reading. If the one reading shows some value and the other is over range, the device is good. If both readings are over range, the device is faulty (open circuit). If both readings are very small or zero, the device is also faulty (short circuit).

In order to measure continuity you need to have a voltage source. If there is a poor connection or a break in the house wiring it can often be located by tracing the wires from the battery bank outwards and using the battery bank as your voltage source.
With the meter on the appropriate voltage scale start by measuring the voltage at the battery. Now move to the next location where you can connect your probes as you head towards the possible location of the fault.
If at any point you measure no voltage then there is a break in the wiring between the previous test point and this one.
If you measure a drastic voltage drop (particularly with a small load turned on) this may indicate a poor connection such as a wire that is almost broken, corrosion in a connector or a wire, or it may be due to undersized wiring.