Pinpointing the exact cause of trouble in an electrical circuit is most times accomplished by the use of special test equipment. The following describes different types of commonly used test equipment and briefly explains how to use them in diagnosis. In addition to the information covered below, the tool manufacturer's instructions booklet (provided with the tester) should be read and clearly understood before attempting any test procedures.

CAUTION
Never use jumper wires made from a thinner gauge wire than the circuit being tested. If the jumper wire is of too small a gauge, it may overheat and possibly melt. Never use jumpers to bypass high resistance loads in a circuit. Bypassing resistances, in effect, creates a short circuit. This may, in turn, cause damage and fire. Jumper wires should only be used to bypass lengths of wire or to simulate switches.

Jumper wires are simple, yet extremely valuable, pieces of test equipment. They are basically test wires which are used to bypass sections of a circuit. Although jumper wires can be purchased, they are usually fabricated from lengths of standard automotive wire and whatever type of connector (alligator clip, spade connector or pin connector) that is required for the particular application being tested. In cramped, hard-to-reach areas, it is advisable to have insulated boots over the jumper wire terminals in order to prevent accidental grounding. It is also advisable to include a standard automotive fuse in any jumper wire. This is commonly referred to as a "fused jumper". By inserting an in-line fuse holder between a set of test leads, a fused jumper wire can be used for bypassing open circuits. Use a 5 amp fuse to provide protection against voltage spikes.

You can sometimes connect the jumper wire directly from the battery to the "hot" terminal of the component, but first make sure the component uses 12 volts in operation. Some electrical components, such as fuel injectors or sensors, are designed to operate on about 4 to 5 volts, and running 12 volts directly to these components will cause damage.

Fig. 1: A 12 volt test light is used to detect the presence of voltage in a circuit 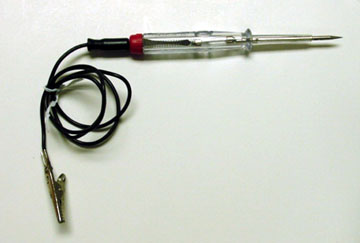 The test light is used to check circuits and components while electrical current is flowing through them. It is used for voltage and ground tests. To use a 12 volt test light, connect the ground clip to a good ground and probe wherever necessary with the pick. The test light will illuminate when voltage is detected. This does not necessarily mean that 12 volts (or any particular amount of voltage) is present; it only means that some voltage is present. It is advisable before using the test light to touch its ground clip and probe across the battery posts or terminals to make sure the light is operating properly.

WARNING
Do not use a test light to probe electronic ignition, spark plug or coil wires. Never use a pick-type test light to probe wiring on computer controlled systems unless specifically instructed to do so. Any wire insulation that is pierced by the test light probe should be taped and sealed with silicone after testing.

The self-powered test light is similar in design to the 12 volt test light, but contains a 1.5 volt penlight battery in the handle. It is most often used in place of a multimeter to check for open or short circuits when power is isolated from the circuit (continuity test).

The battery in a self-powered test light does not provide much current. A weak battery may not provide enough power to illuminate the test light even when a complete circuit is made (especially if there is high resistance in the circuit). Always make sure that the test battery is strong. To check the battery, briefly touch the ground clip to the probe; if the light glows brightly, the battery is strong enough for testing.

NOTE: A self-powered test light should not be used on any computer controlled system or component. The small amount of electricity transmitted by the test light is enough to damage many electronic automotive components.

Multimeters are an extremely useful tool for troubleshooting electrical problems. They can be purchased in either analog or digital form and have a price range to suit any budget. A multimeter is a voltmeter, ammeter and ohmmeter (along with other features) combined into one instrument. It is often used when testing solid state circuits because of its high input impedance (usually 10 megaohms or more). A brief description of the multimeter main test functions follows:

WARNING
Never use an ohmmeter to check the resistance of a component or wire while there is voltage applied to the circuit. 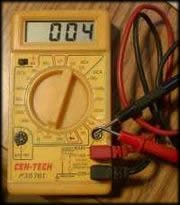