Auto Repair Maintenance - What should I do?

The best way to fix a car problem is to prevent the problem from happening in the first place. With the proper car maintenance car repairs can be cut down to a minimum. You can't always predict when your car might have a problem but there are several things you can do to insure the car stays in good running condition. 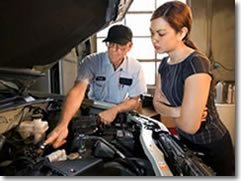 You know the old saying, "an once of prevention..." If you need automotive maintenance schedule check out the auto repair manuals. It is quite interesting what is under the hood of a car and it can leave you asking yourself questions. Does the engine oil need to be changed? Maybe your transmission needs some work or filter serviced? Something seems wrong with your brakes? Is your car making strange noises? Acquiring a vehicle is a fairly easy task... the tough part comes later with maintenance.

How to Change Oil Yourself

How Car Maintenance Can Save You Money

The way cars are built today has almost made maintenance unnecessary. If your plan is to trade your car in for a new one before your warranty is up, like at 50,000 miles. You don't even need to change the oil or rotate your tires. This definitely lowers all car maintenance costs

Now with that being said, if you plan to keep your car for some time. Change the oil every 3 to 5 thousand miles. Rotate your tires front to back every other oil change. Replace your wiper blades every other year. And by all means, just walk around and take a look at it every now and again. Look to see that your lights are working. If it is slow to crank over, replace the battery SOON! Check the air filter when you change the oil. If it needs one, replace it. $10 bucks now may save you a $100 bucks in the future.

In the long run a few things maintained now may save you from a lot of things later. As one one thing goes it can break other things.

The best and most efficient method of knowing about your car and keeping track of it is through the owner's manual which provides complete information on how to go about it. You can inspect your car every time you enter it, or on a daily or weekly basis or at intervals specified in the manual.

A few while driving tips

At times, strange smells may emanate from inside your car. The possible causes may be:

Strange smells are an early warning signal that need to be heeded if much more time and money are to be saved later on.

Strange sounds tend to be sidelined in the bustle and din of our roads, and by the car stereo playing in the background. However, if the problem persists, the car will make its condition known every time you take a corner or ride over a bump. Some easily recognizable sounds are

At times, your car give personal signals which can be deciphered by only the user. Strange 'hiccups' while driving indicate faulty fuel which would in turn cause faulty carburetor or fuel injector. If there is unequal or wrong air pressure in tires, it is evident on braking. Unexplained shudders in braking indicate problems in suspension or linkages.