When a car problem occurs, the first step is to trouble shoot the related system. Then, perform simple tests that can lead you to the cause of the malfunction and the repairs needed to correct the problem. Follow the "first thing to check" list and test by symptoms how to test for a problem, then execute the proper repair.

When the choked engine is cranked, fuel is pulled into the engine through the idle port, the transfer port and the main metering circuit. Combined with the reduced air supply, it creates the extremely rich mixture that's needed to start a cold engine.

As soon as the engine starts, it needs air to keep running and to offset the super rich fuel mixture. The choke plate shaft is offset slightly to one side so incoming air will tend to push it open. On many older carburetors, a vacuum operated piston in the choke housing or carburetor casting was used to pull the choke plate partially open so the engine could receive sufficient air to keep running. These pistons were prone to gum up and stick, causing hard starting and stalling problems.

In most later model carburetors (but not all), the vacuum piston has been replaced with an external "choke pull-off" vacuum diaphragm. The choke pull-off is also attached to the choke linkage where it pulls the choke plate open slightly as soon as the engine starts. On some carburetors, a pair of choke pull-offs are used to give a more progressive opening. If the choke pull-off fails to work (because of a vacuum leak or ruptured diaphragm), the engine may be hard to start or stall. The amount by which the choke is pulled open can be adjusted by bending the "U-shaped" pull-off linkage. If the linkage is not properly adjusted, however, it may open the choke too far, admitting too much air causing the engine to stall.

Once the engine starts and begins to warm up, the fuel mixture is gradually leaned out until the choke is fully open. This job is performed by a temperature-sensitive bimetal spring attached to the choke plate. The bimetal spring may be located in a well in the intake manifold where it is heated by exhaust gases flowing through the crossover passage, or it may be located inside a plastic housing on the carburetor itself.

The choke housing may be heated one of three ways: by hot air siphoned up through a pipe in the exhaust manifold that then flows through the housing and enters the carburetor; by an electrically heated element inside the housing; or by engine coolant circulating through a hose attached to the housing.

Whatever the source of heat, the bimetal spring reacts by unwinding to open the choke (which may occur in as little as 45 seconds or less on an emissions controlled engine). When the engine is shut off and allowed to cool, the bimetal spring contracts, winding up tighter to pull the choke shut. But since the choke linkage is also attached to the "fast idle cam," the choke won't close until the linkage is pumped at least once to reset the cam. On automatic chokes that use an electric heating element, a temperature sensitive contact switch may be used to break the flow of current to the heating coil when the housing is hot.

When the choke is defective or not adjusted properly, it can make an engine hard to start. The engine may also stall or die after it is started.

Problems with the operation of the choke will result whenever heating is lost at the choke housing. On carburetors that draw heated air through a pipe in the exhaust manifold, rust can corrode the inside of the pipe blocking air flow. Or the pipe can simply rust off. When this happens, the bimetal spring doesn't heat up quickly enough causing the choke to open too slowly. The result is a rich fuel condition resulting in a rough idle, excessive fuel consumption and high emissions. On carburetors that use an electric heating element, a loose wire or poor ground connection can prevent the choke from opening. The choke housing should feel hot to the touch within a minute or so after the engine is started if its heat source is working correctly.

The choke can be adjusted to alter the temperature at which it closes and opens, which also enriches or leans the starting fuel mixture. The choke is adjusted by loosening the screws that hold the choke housing and then rotating the housing. This changes the relative position of the bimetal spring inside which puts either more or less tension on the choke.

Rotating the housing to increase tension on the choke (which you can detect by holding the choke plate or watching it move) will make it close at a higher temperature and enrichen the mixture. Rotating the choke housing to decrease tension will make it close fully at a lower temperature and produce a somewhat leaner mixture. Notches are provided on some housings for reference. The vehicle manufacturer will often specify how many notches rich or lean the choke is to be adjusted.

On many late model carburetors, rivets are used instead of screws to discourage tampering with the choke housing adjustment. But this doesn't prevent adjustments because the rivets can be drilled out. Once the adjustment is made, new rivets or screws can be installed. 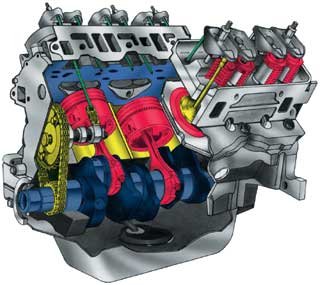