There is green, orange, red, and yellow. You can not mix green with red or orange(known as Dex-cool) or it will turn brown and sludge up and clog your heater core and cause the vehicle to overheat. Yellow can mix with anything but is the most expensive next to the Dex-cool. Green is mostly used in cars pre 2000

Cars operate in a wide variety of temperatures, from well below freezing to well over 100 F (38 C). So whatever fluid is used to cool the engine has to have a very low freezing point, a high boiling point, and it has to have the capacity to hold a lot of heat.

Water is one of the most effective fluids for holding heat, but water freezes at too high a temperature to be used in car engines. Water boils at 120 degrees so water alone will not work under extreme heat either. The fluid that most cars use is a mixture of water and ethylene glycol (C2H6O2), also known as antifreeze. By adding ethylene glycol to water, the boiling and freezing points are improved significantly. The normal mixture is a 50/50 blend.

The temperature of the coolant can sometimes reach 250 to 275 F (121 to 135 C). Even with ethylene glycol added, these temperatures would boil the coolant, so something additional must be done to raise its boiling point. Anti-freeze with out water will also boil before the engine reaches operating temperature so water must be mixed in. 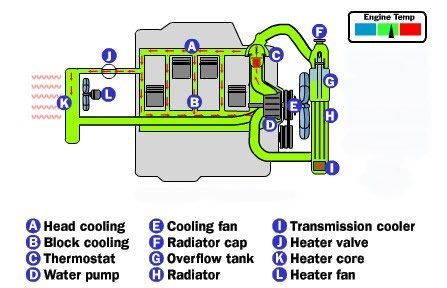 On cars with automatic transmissions, there is normally also a separate circuit for cooling the transmission fluid built into the radiator. The oil from the transmission is pumped by the transmission through a second heat exchanger inside the radiator.
Find a repair manual for your car - Get instant access to your vehicles drive belt routing, complete wiring diagrams, trouble code information and other available updates and factory bulletins. FIND OUT MORE.