VSS types include: photo-optic, permanent magnet generators(The Vehicle Speed Sensor (VSS) is a magnetic pick-up that sends a signal to the Powertrain Control Module (PCM).) or hall effect technology. The PCM may use other sensors on the vehicle (ABS Wheel Speed) to validate VSS operation.

The sensor measures the rotation of the transmission and the PCM determines the corresponding vehicle speed. A faulty speed sensor due to loose connections, bad grounds, high resistance in the circuit, or opens in the circuit can cause the following symptoms 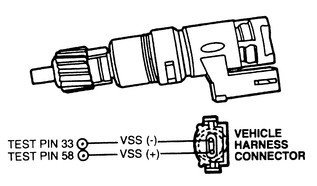 The VSS is located half-way down the right-hand side of the transmission assembly.